Just as there is no place for two bears in one lair, two eagles in one nest, so there should be no place for two celebrations at one wedding. At the very least, this is an event that should ideally be remembered for a lifetime. This celebration is primarily for two people.

But not everyone seems to think so. Firstly, it often happens that parents impose their opinion on the newlyweds about what their wedding should be like. And secondly, sometimes there are people who want to steal the day. This story is, in particular, about one of those people.

The r/TrueOffMyChest community once had a post with almost 900 upvotes and nearly 200 different comments where almost everyone supported the Original Poster. Yes, she defended her right to marry the way she and her fiancé thought they should – but she paid a rather high price for it. However, let’s talk about everything in order. 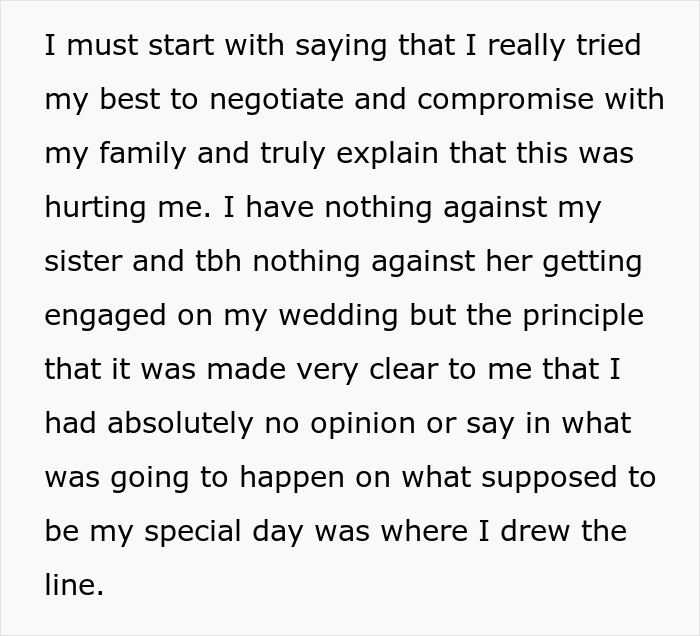 So, the OP planned the wedding, and her parents were going to arrange a large-scale celebration with a number of guests, and even undertook organizing it – despite the fact that the bride herself was not happy about this idea. However, she was even more upset when she learned about another idea her relatives had. 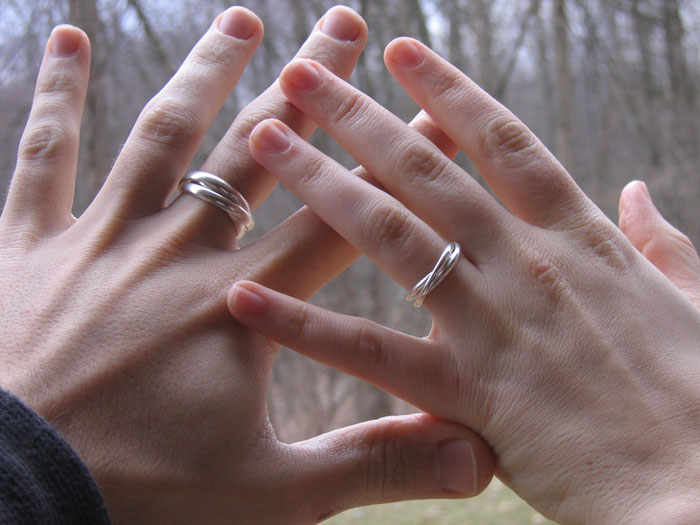 The fact is that the OP has a sister, and her boyfriend came up with the idea to propose to her during the wedding ceremony. Of course, it would be a spectacular, memorable sight, and the OP’s sister would be happy… which was not the case for the OP herself. Who would be really happy if your special day had to be stolen by someone else? 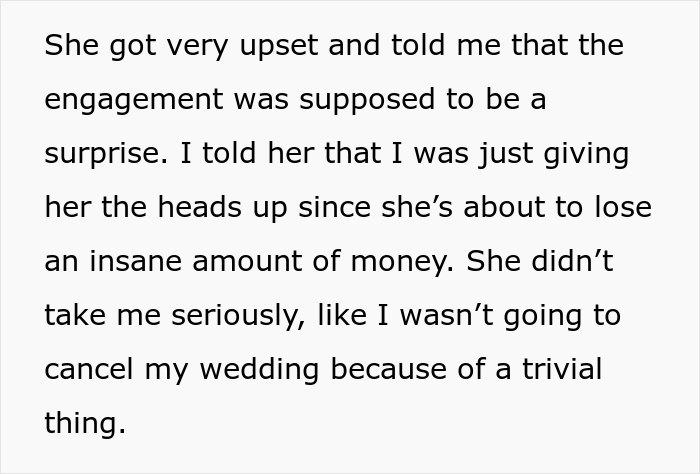 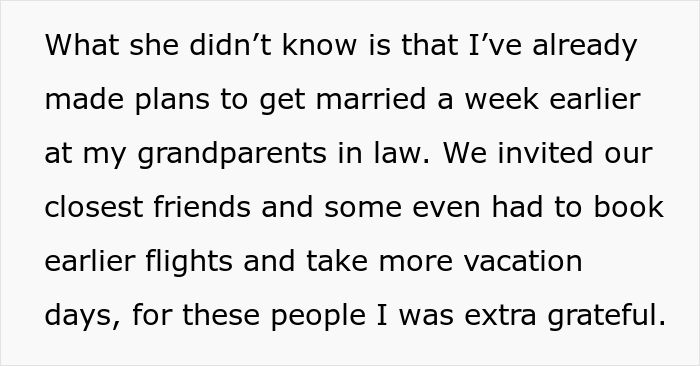 The bride tried to argue with her parents, but she was literally put before the fact, and when the OP suggested just organizing a special engagement party, they said that it should be a surprise for her sister and guests. The OP hinted to her parents that they should not spend insane money on organizing the party, but they did not want to take their daughter seriously. 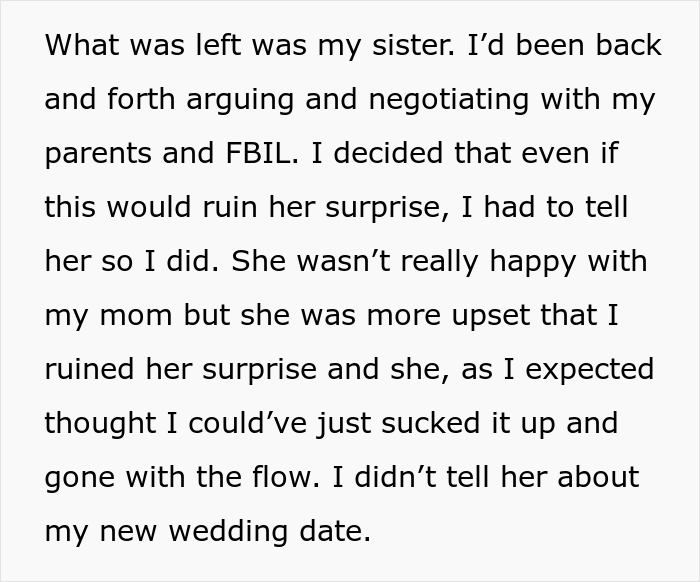 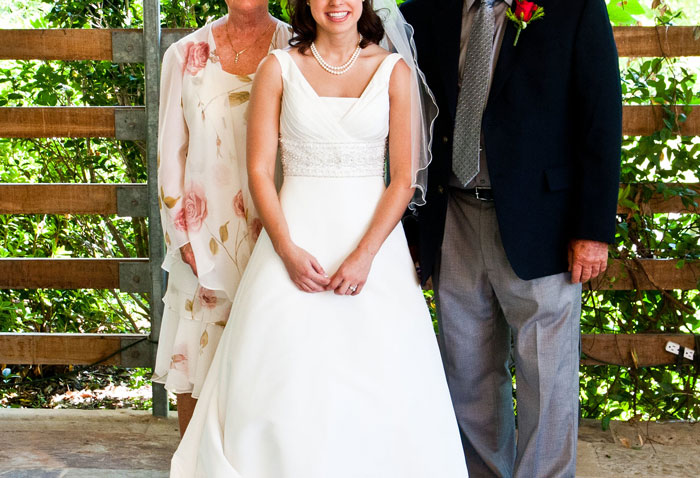 The OP had to talk about this with her sister, thereby ruining the surprise for her

The OP decided to talk to her own sister, trying to enlist at least her support – even though it would ruin the future surprise. We must say that the sister was not happy with the idea of ​​sharing the celebration, but was also very upset because the surprise was now ruined. However, the real surprise was yet to come… 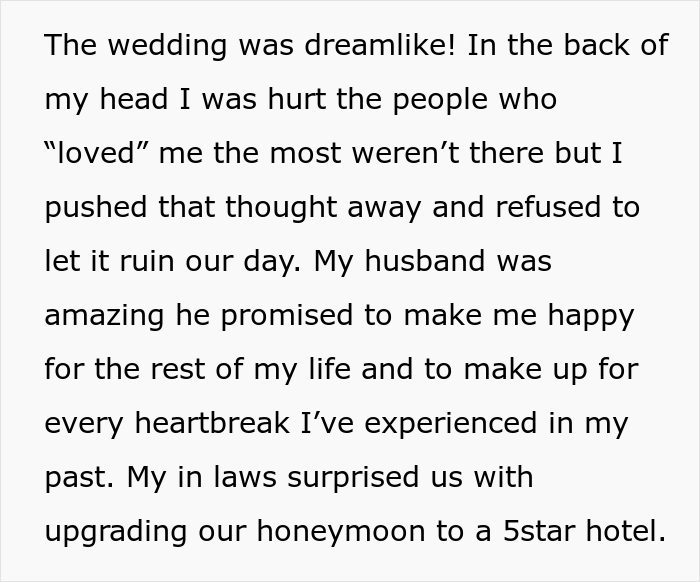 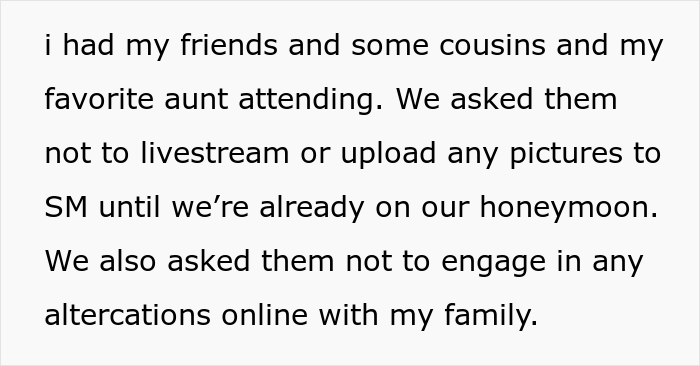 The OP and her fiancé eloped a week earlier, inviting only his parents and their closest friends

The OP talked with her fiancé, his parents and closest friends, and secretly arranged a small wedding ceremony a week before the planned date. Everything turned out extremely beautiful and romantic, and the in-laws gave the newlyweds a honeymoon in a five-star hotel. 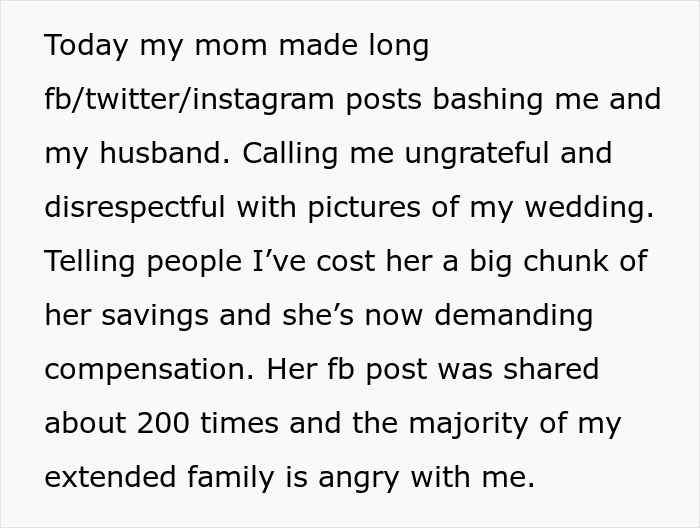 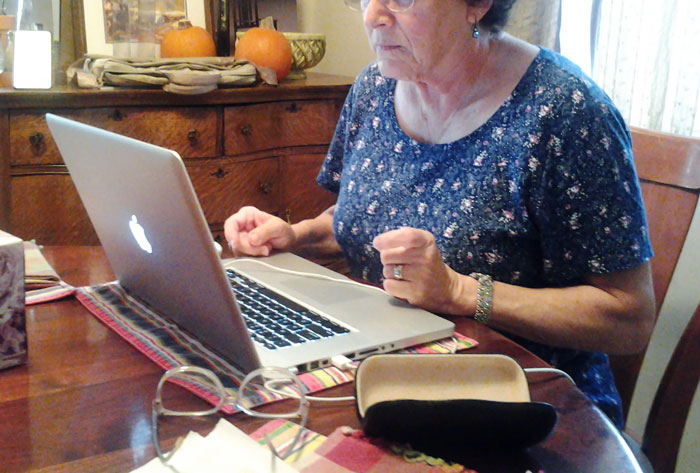 The couple asked all guests not to share photos from the wedding until they left on their honeymoon. And so it happened. And then the bride’s relatives found out about the incident, and her mother wrote a huge wrathful post on Facebook, accusing her daughter of ingratitude. To top it off, the parents demanded that the OP reimburse them for the costs of organizing her wedding! 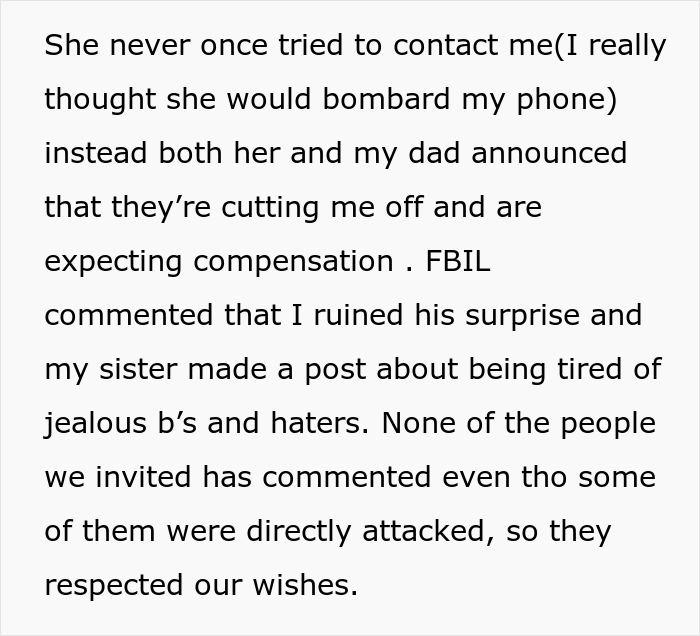 The OP’s father also supported his wife, saying that he was cutting off all relations with his daughter, and also demanded compensation for the money spent. And this despite the fact that the OP herself warned her parents more than once that she did not want their financial participation, and that it was not worth spending a lot of money on this at all.

We must admit that people in the comments massively supported the OP and, of course, congratulated her on her wedding. In fact, according to commenters, the OP’s parents look at least strange trying to ruin their daughter’s wedding with her sister’s engagement at the same time – and when she went against their will, also demanding that she pay them.

Some commenters also noted that the OP’s tale looks similar to their own because narcissistic parents are, alas, a fairly common thing. Either way, the OP and her fiancé did the right thing by standing their ground and not letting other people steal the day of their happiness.

By the way, we have many more wedding stories that may interest you. For instance, this post about a bride whose family tried to impose an unpleasant bridesmaid on her, or about an overly annoying wedding guest. In the meantime, we will be so glad to know your opinion about this very story in the comments.