And just like that, it’s official! Wedding bells are ringing at Hansika Motwani’s house as the actress is ready to tie the knot with her fiance and Mumbai-based businessman Sohail Kathuria. Earlier, there were a lot of speculations about her wedding details. But for now, we are happy to sit back and enjoy her dreamy proposal.

For those of you who don’t know, Hansika was previously rumored to get married on December 4. Although the news was not confirmed at the time. It seems that the wedding is not too far away from their family. But, first see how Sohail popped the question.

Being an actress, it’s only fair that her boyfriend tries his best to make the ordeal as romantic as possible for Hansika. And what’s more romantic than the magnificent Eiffel Tower? One of the most classic places to propose. In pictures shared recently on social media, Hansika can be seen saying yes to her lover with all smiles.

Posting a series of pictures on Instagram, the actress was seen wearing a white midi-length dress as Sohail got down on one knee to propose to his lady love. She captioned it, “Now&Forever.” 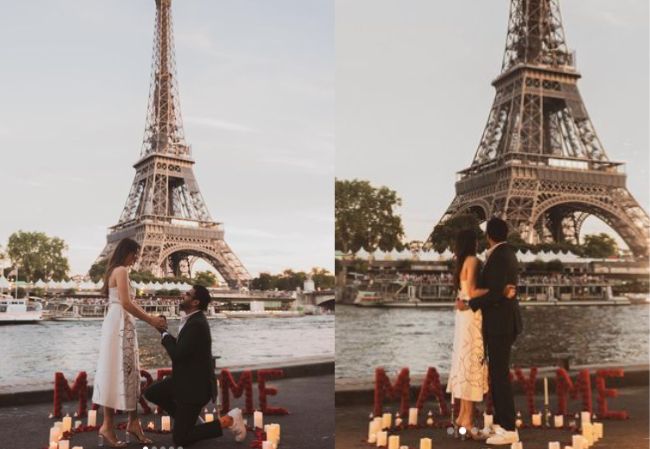 According to reports, the pheras are scheduled to take place on December 4. Apparently Haldi is scheduled on the morning of the wedding. Apart from these two events, a Sufi night will be held on December 2. It is followed by Mehendi and music the next day.

From family polo matches to casino-themed parties, weddings are already proving to be quite a fun affair. According to a source, the wedding venue is Mundota Fort-Palace in Jaipur.