While many of us may not be experts in etiquette, knowing every single rule on how one should behave in a certain situation, there are some things that have been talked about and discussed so many times that they became something that is considered common sense. Some of these rules are focused on big life events, such as birthdays and weddings. Everyone knows that you can’t wear white to a wedding, everyone is aware that you don’t steal a spotlight from a person who’s celebrating something important in their life. Unfortunately, not everyone is aware of that. This was once again proven by Reddit user @u/Neither-Glove-4355 who decided to share how his brother decided to ruin his wedding by proposing to his girlfriend. Despite the man’s audacity to go with his audacious plan, his brother was prepared to teach him a lesson and get his revenge for crashing his and his wife’s special day.

It’s an unwritten rule that you don’t steal the spotlight from newlyweds on their big day, but some people just love to break rules

A 35-year-old man started his story by sharing that he doesn’t have the best relationship with his family which consists of his parents, 32-year-old sister Abby, and 29-year-old brother Todd. While he maintains a relationship with his sister, the author of the post revealed that he maintains low contact with his parents and brother, the reason being that from an early age, they let Todd do and have everything that he wanted because of how complicated his birth was. This behavior made the youngest of their kids become an attention seeker. 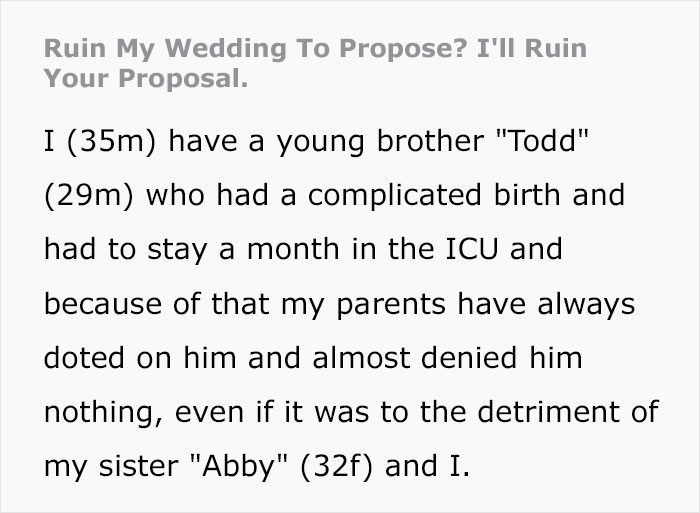 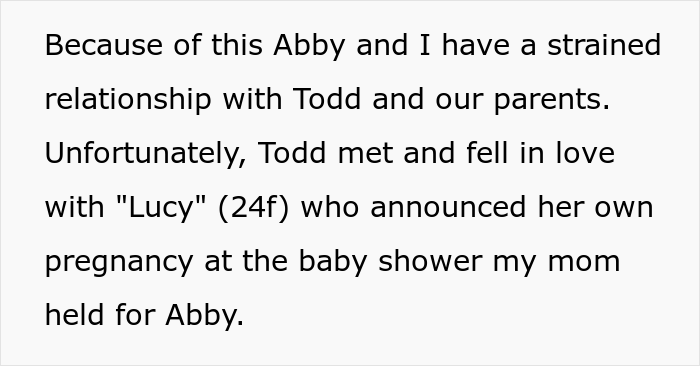 One of the examples that OP shared of his brother wanting to be the center of attention was when he and his partner Lucy decided to announce Lucy’s pregnancy during his sister’s baby shower. Because of situations like this, the Reddit user who proposed to his girlfriend Michelle didn’t want to invite his family to the wedding, and would rather just simply elope. But his soon-to-be wife convinced him to invite his family as she wanted her parents to be there too.

After finding out that his brother might propose to his girlfriend during his wedding, the groom asked him not to do it 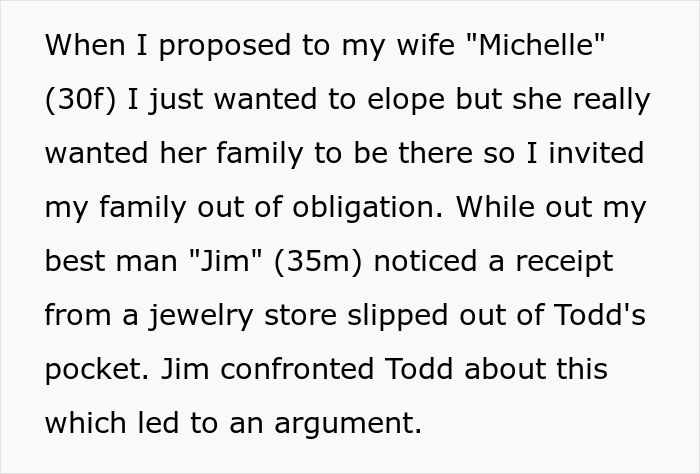 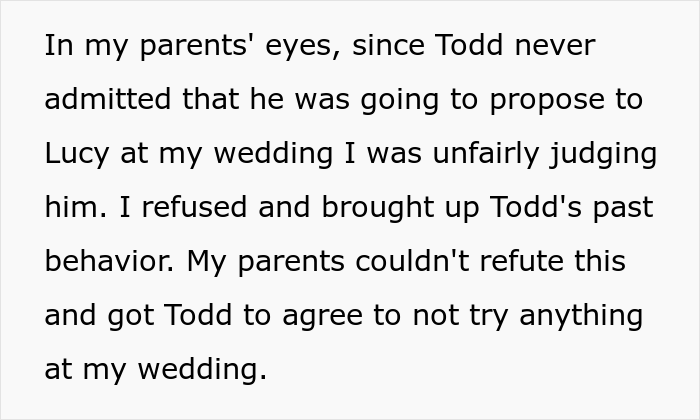 The man warned his brother that if he proceeded with the engagement, he would make him regret this decision 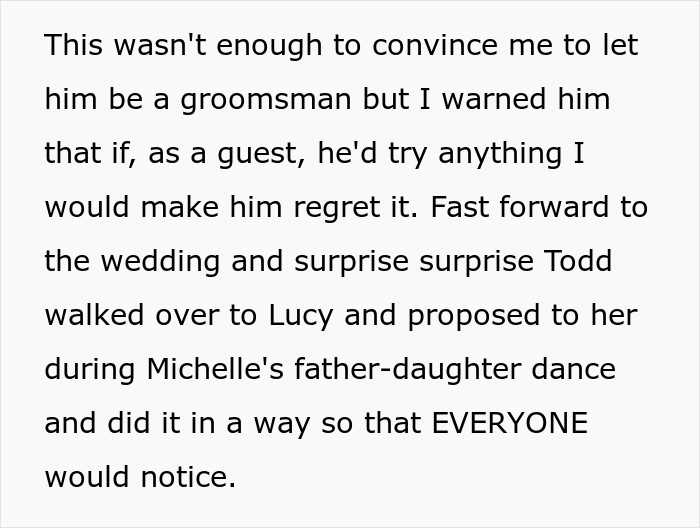 While many unexpected things might happen during the preparations, things started to go south not because of a lack of organization, but because of Todd’s entitlement. The author of the post shared that his best man Jim found a receipt from a jewelry store after it slipped from Todd’s pocket. Jim confronted the OP’s brother, making sure that he wasn’t thinking of proposing during the wedding. The whole argument got to a point where the parents had to get involved and convince Todd not to do such a thing, and even the groom himself warned his brother that he wouldn’t let it slide if he did propose to his girlfriend during the celebration .

Despite the groom’s request and warning, the man proposed to his girlfriend during the bride’s and her father’s dance, ruining their moment 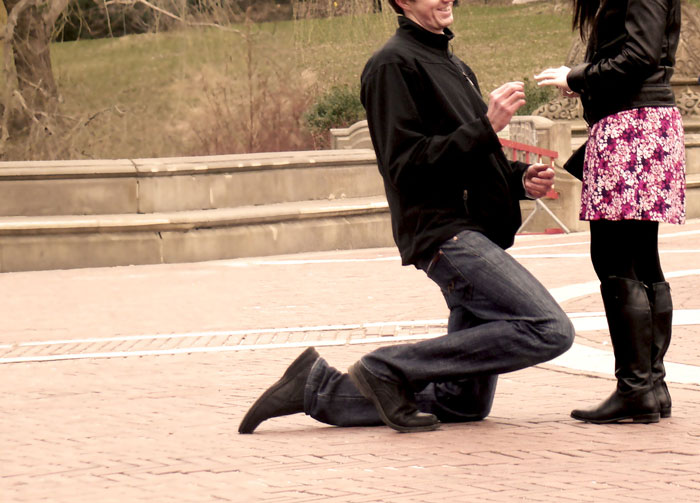 Despite all the warnings, Todd asked his girlfriend to marry him and even did it during the father-daughter dance, ruining one of the most special moments for the bride. Knowing his brother, the groom was prepared for revenge. A few weeks before the wedding, when the whole engagement debacle first started, the groom hired a woman who would pretend to be his brother’s pregnant mistress and appear after their engagement. His plan worked out as Lucy believed this woman. Things didn’t go well for Todd who was thrown out of his home and was forbidden to see his kid. Even though OP went with this plan because his brother didn’t listen to him and once again ruined someone else’s special moment, the author of the post started to doubt his actions as his sister told him that he went too far, so he shared this story with others online to find out what they think about it.

Knowing that his brother would go behind his back, the groom had already prepared a revenge plan and proceeded to go with it 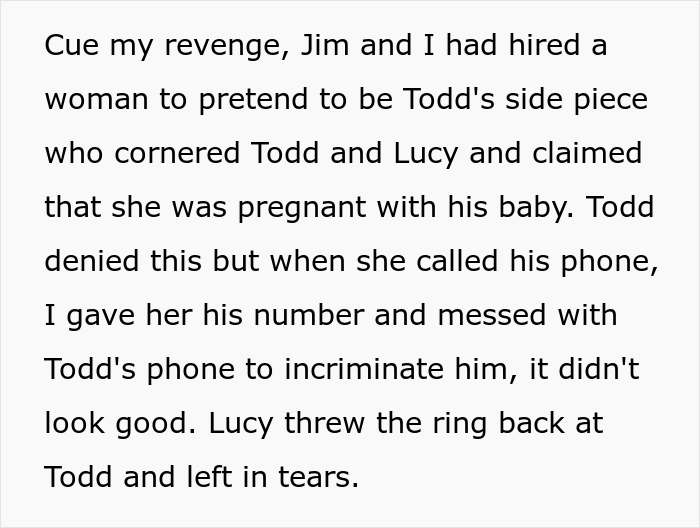 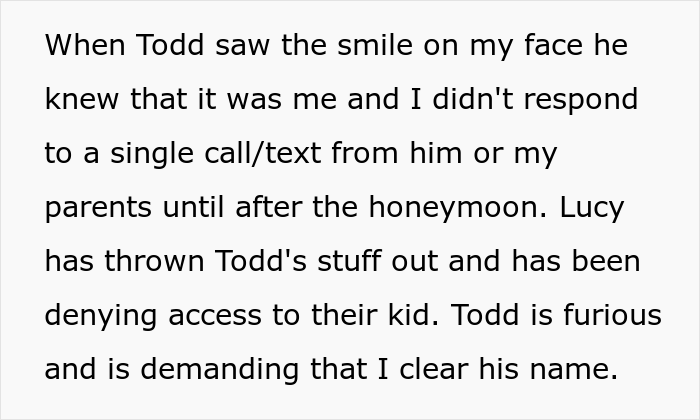 This situation divided the users into those who thought that OP was right to teach his brother a lesson and those who thought that all of this could’ve been handled better. There was another group of people who believed that the story was fake. Bored Panda contacted the Reddit user to find out more insights on the situation and to ask what he thinks about such opinions. “I think there are people who feel this is fake because it is an outrageous story, I’m using a throwaway account, and I wouldn’t give any details about myself in order to maintain my anonymity,” explained the author of the post. . 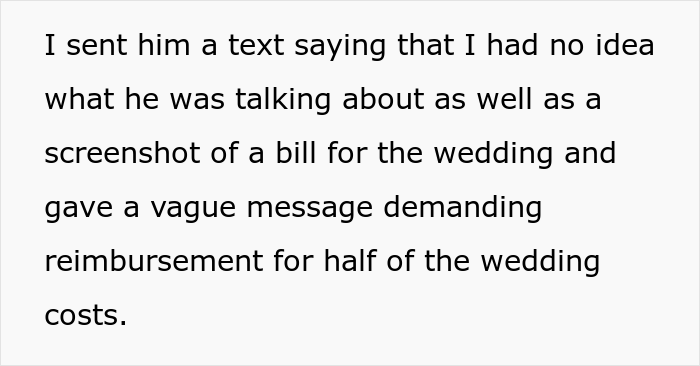 The story that ended up in Reddit’s Petty Revenge section received more than 32k upvotes and more than 3.3k comments. The user revealed that such attention came as a surprise, sharing: “I just decided to write something on Am I The A**hole to see if people would agree or disagree on revenge and while I did think it would get up to at least a thousand, I wasn’t expecting this.” What is your take on this story? Don’t forget to leave your thoughts in the comments down below!

Despite teaching his brother a lesson, the man started doubting himself, wondering whether he took this whole thing too far 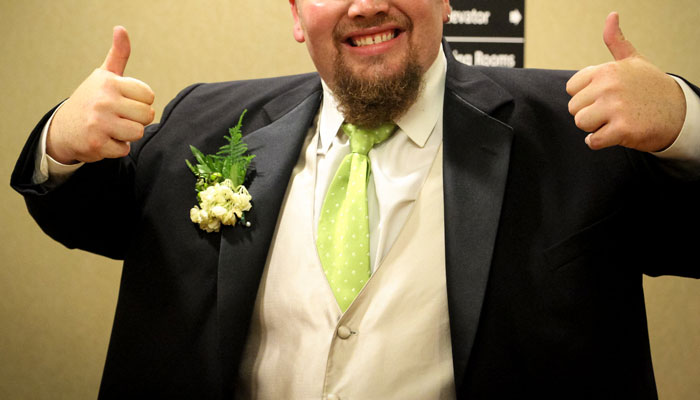