Emma and Michael met “at a rainy Towson University tailgate” as juniors in college. A mutual friend had invited the pair to attend the game, and after a few rounds of can-jam, Michael invited Emma back to his house to play Rock Band. When he offered to share the drum set with her during their third rendition of “Beverly Hills,” says Emma, ​​she “was as good as him.” The pair got to know each other better over cigars on the roof of his townhome and spent the following few weeks binge-watching seven seasons of Game Thrones—proof, says Emma, ​​that she must have really liked him. “By season three, he worked up the nerve to kiss me,” says Emma.

A few weeks later, on a moon-lit picnic of pizza and wine over a game of Never Have I Ever at a driving range, the pair “made if official.” A few years later, they said “I do” at an outdoor ceremony in Virginia. Check out the details of their big day, and more of their love story, below.

While the pair disagree on what constitutes their official first date, the night they made their relationship “official” is like a scene out of a movie, they say.

After picking up pizza and a bottle of wine, the pair drove out to the driving range at Hillendale Country Club, where they scaled the fence to set up a make-shift picnic on the green on a starry night. “For hours, we sat and watched the stars, sipping wine straight from the bottle and playing rounds and rounds of “Never Have I Ever” as “Every Rose Has Its Thorns” and “Drops of Jupiter” played on a playlist beside us, ” recalls Emma. “Every question that I asked him seemed to check another box off my list and at some point as we laid stargazing, I just felt this overwhelming feeling like I’d finally arrived. That this was the love and the life I’d been waiting for. And that my world would never be the same after that night.”

Just as Michael had finally worked up the nerves and asked Emma to be his girlfriend, she said “yes” and the sprinklers on the golf course turned on. “He scooped me up and kissed me as they poured down and I answered him yes yes yes a thousand times over,” Emma says. “It was one of those moments that felt like a movie – the kind you have to experience to believe. But to me, it felt like a sign from God that this was exactly where I was meant to be, and exactly who I was meant to be with for the rest of my life.”

On the day of their first dating anniversary, Michael was diagnosed with cancer. “In the months leading up to our engagement, we learned that Michael’s cancer had become unresponsive to treatment and that the coming months would include much more hardship than we’d ever planned to endure,” she says. “Just as we glimpsed the finish line, it seemed we were thrown into a whole different race—one scarier and more dangerous.” . . . I remember discussing our options, the extraordinary risks, and praying over our future as husband and wife. And as we prepared for the coming months, one thought was resolute in my mind: I want to marry this man—and fast.”

Emma says she was sure the pair would elope.

“I didn’t care that I was 20, still in school. . . . I’d asked Michael many times over the last year if we could just run off and be married, and every time he responded sweetly, simply, that his focus was on “beating this” and that when he did, we would have the big, beautiful wedding that was worth waiting for.”

Still, they decided on an engagement and agreed to take engagement photos sooner than later. Before a proposal, Emma planned a weekend in Charleston, booked a photographer, and then waited—rather impatiently, she says—for him to pop the question.

Then one Sunday morning, he drove her out to Quiet Waters Park in Annapolis “for a fountain-side picnic filled with all my favorite things,” Emma says. They sipped wine and counted clouds “to the turn of a—completely unplanned—nearby harpist.” Just as she thought he was going to propose, he started packing up their things. But on the way to the car, he asked if she wanted to take a walk down to the water (“Immediately, yes!”) Once to the water, Emma noticed a gazebo covered in rose petals. Inside, Michael got down on one knee.

Two weeks later, they took their trip to Charleston. 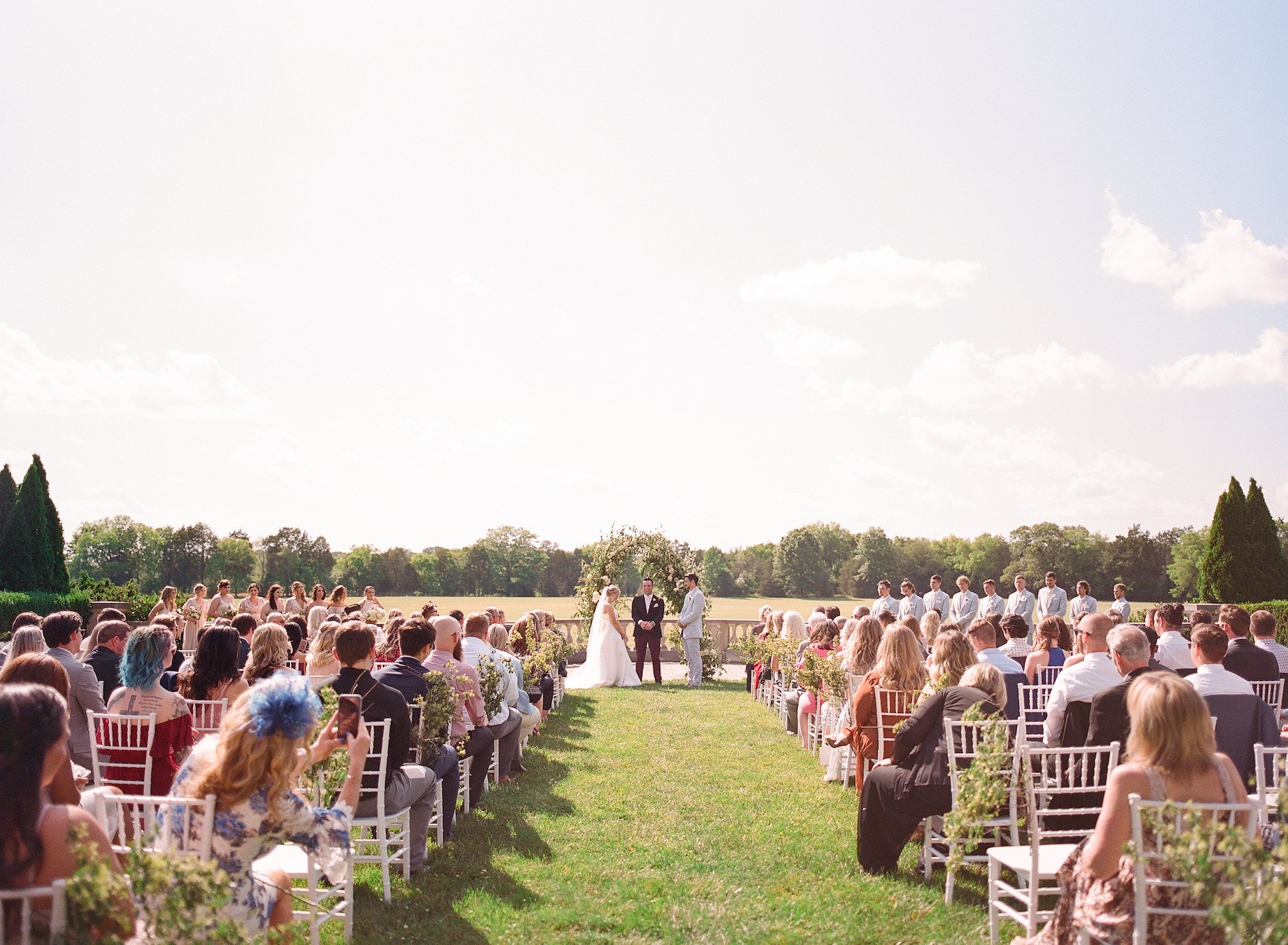 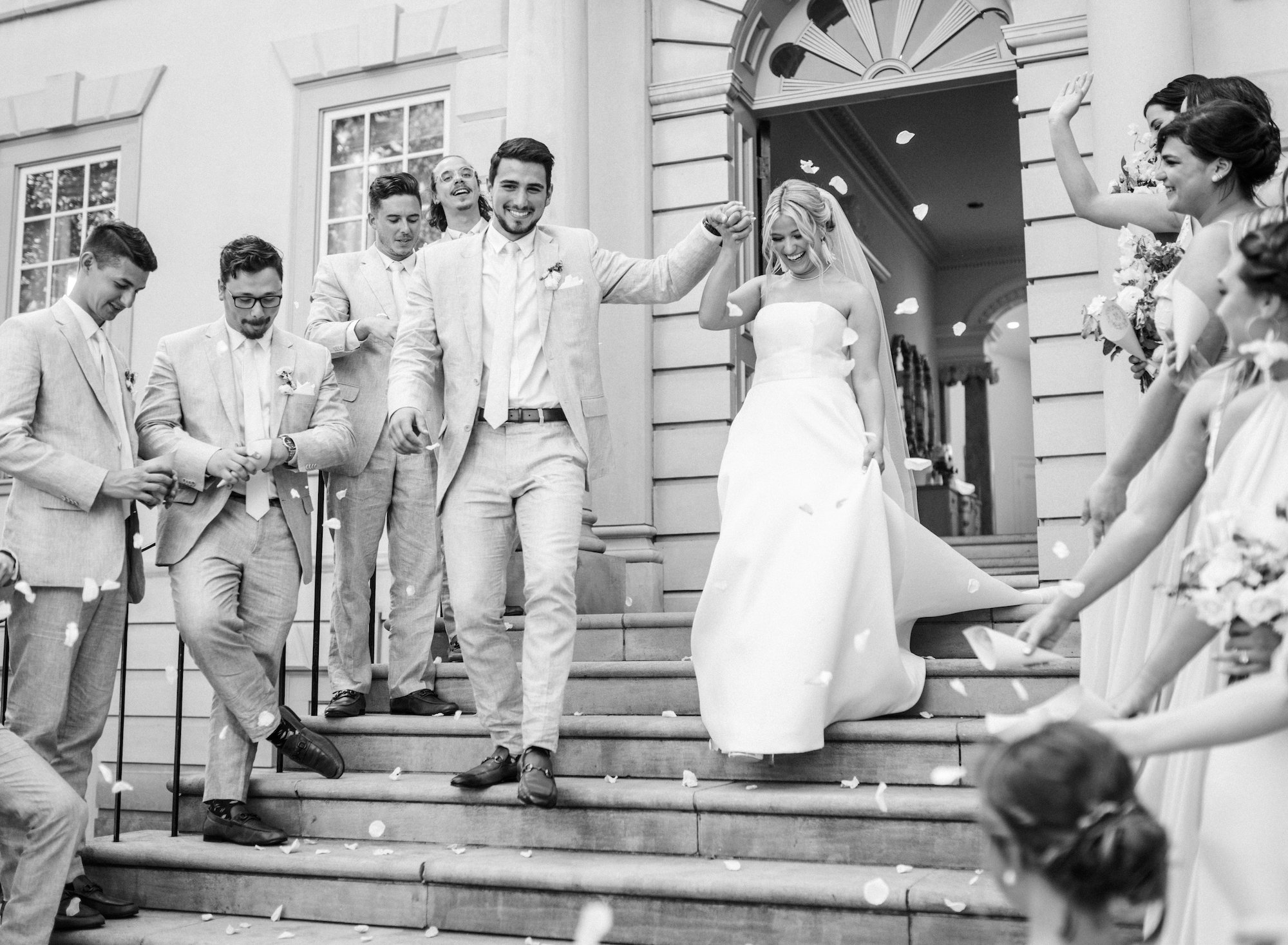 The pair initially planned their wedding for May 22, 2020—two years from the proposal. With Covid, they say, the two years became three. But to commemorate their original wedding date, the pair eloped in Charleston, on a picnic blanket, reading poetry and exchanging vows before sharing a first dance in a nearby gazebo. Moments later, they “made it official” at a nearby Charleston court house.

From there, Emma says, the countdown to “part two” of their wedding day, now slated for June 4, 2021, began. They landed on a “southern vintage” theme in shades of blush, gold, and light gray. Among Emma’s favorite details was the Bible that carried their rings down the aisle—it belonged to her grandmother, says Emma, ​​and holds a photo of her and Emma’s late grandfather. “She gifted it to me at the start of our engagement, before her diagnosis with Alzheimer’s. She was unable to attend my wedding day due to the pandemic, and having this detail accompany me down the aisle was so special.” The most vivid moment of the ceremony, Emma says, was the feet-washing ritual: “We wanted to take a moment in the midst of this day to demonstrate the sacrificial love that we have for one another, and for our first act as husband and wife to be one of service and devotion,” she says. Another special moment: presenting her mother with a portrait Emma had commissioned of herself, her mother, and her grandmother, standing side by side in their wedding-day attire. “Just after she helped me into my dress, I presented her with the gift and there was not a dry eye in the room. Seeing each of us painted together, at the same age, all bright-eyed and bushy-tailed. . . . it was surreal; and given that she so desperately wished her mother could have joined us there that day, it was truly a moment to cherish.” Among Michael’s favorite details was the cigar-rolling station that served as a nod to his father’s Cuban heritage.

The pair observed a bourbon-burying tradition in the hopes of good weather, and buried a bottle on site 30 days ahead of the ceremony, which, says, Emma, ​​”did its job!” Following their petal toss, they drove out to the stables at the edge of the property and unearthed the bottle to toast with their bridal party.

The invitation suite featured a portrait of the venue, and a hand-painted crest of the flowers, which was also featured on the petal toss cones, corn hole boards, match boxes, and escort display.

For the “something borrowed,” Emma’s mother leant the couple her collection of china bells, which they placed at each table with a tag that read “ring for a kiss.” Also borrowed: Emma pinned quills belonging to her sorority sisters onto her bouquet. Another sentimental touch: Michael’s mother pinned into his blazer a handkerchief embroidered with the initials of his father and two grandfathers, and stitched with a piece of her own wedding dress.

As favors, the couple gifted guests with small bottles of local honey that read “meant to bee” and were displayed on an eight-foot wooden honeycomb that Michael built. At the end of the day, Emma says, they sent guests out to light sparklers for the exit, then dimmed the lights, shut the doors, and shared one more dance alone on the dance floor.

The couple had hoped for an Almafi Coast honeymoon, but instead decided on an impromptu 10-day road-trip up the coast to New England, where they explored Providence, Cape Cod, Nantucket Island, Portsmouth, Ogunquit, and Norfolk.

Check out their wedding video, by Luke Fletcher Films, here. 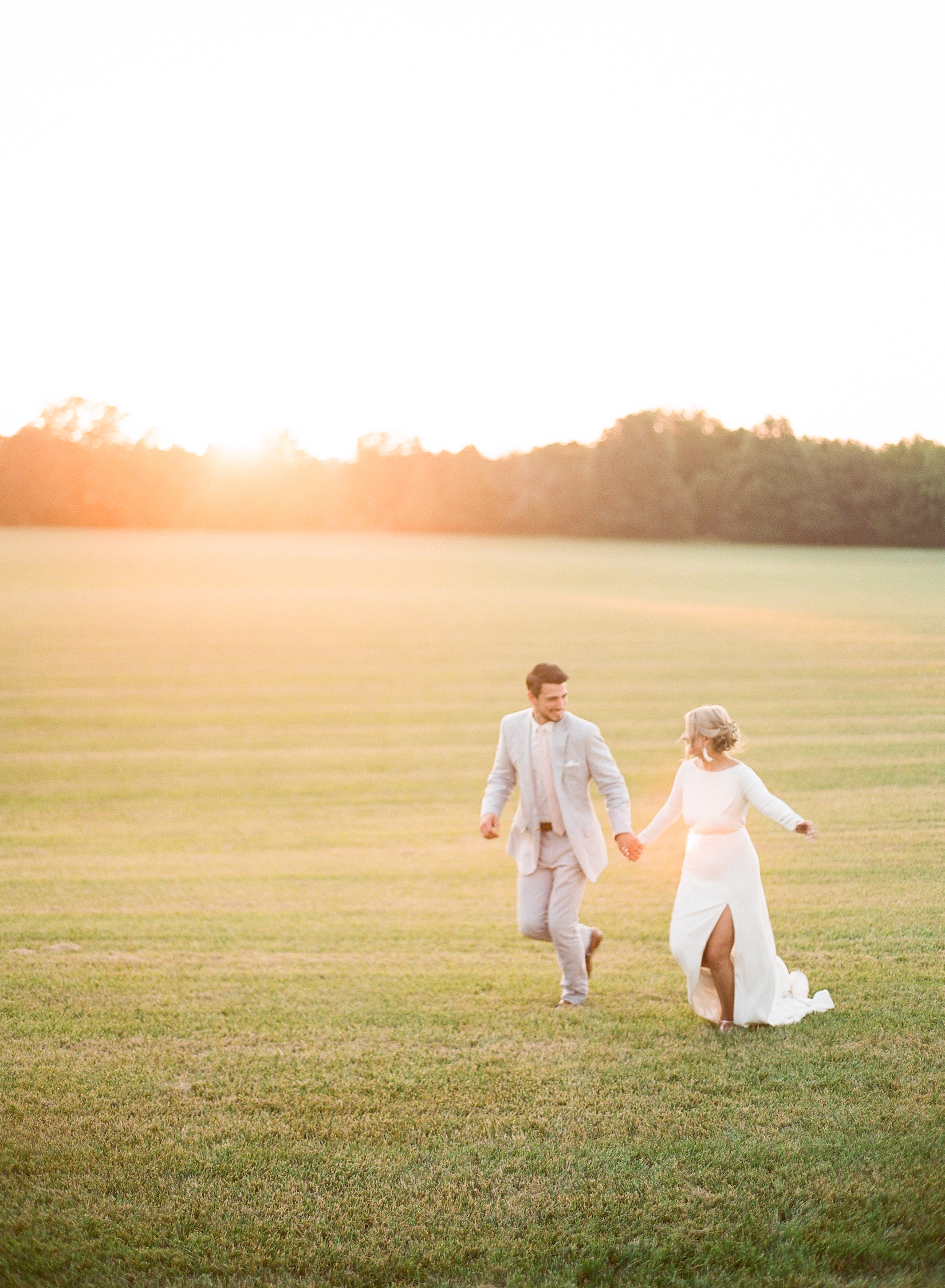